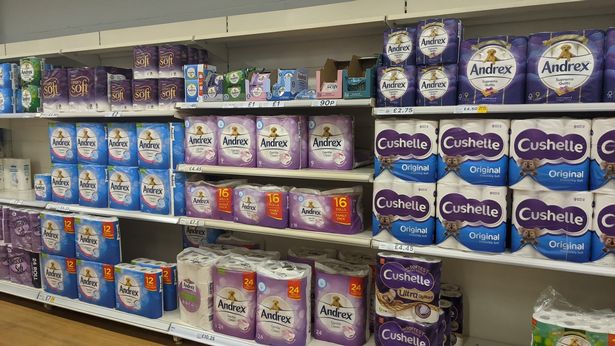 Tougher measures came into force today across Liverpool and the whole of Merseyside.

While the Government insists the new measures, which include a 10pm curfew on pubs, bars and restaurants, are not placing the country into a full lockdown which we saw back in March, it has caused much concern.

The new rules and restrictions shouldn’t impact your weekly shop however supermarkets have already been forced to warn customers from stockpiling to prevent scenes similar to earlier this year.

Boris Johnson did confirm today the fine for not wearing a face masks in a shop would be £200 increased from the original £100.

We visited each of the big four supermarkets this afternoon as well as Aldi to see if there were any changes to stores. We wanted to check stock levels, any new safety measures and if we had to queue to get inside.

While Tesco on Hanover Street in Liverpool city centre saw lengthy queues at the start of lockdown, this was not the case when we visited today.

During the height of lockdown Tesco had staff at the entrance offering hand sanitiser and pointing out the one-way system in place.

Now, there is a hand sanitising station tucked away in the corner, no staff at the door and no one-way system. Tesco Hanover Street is now allowing shoppers to exit via it’s usual doors rather than the alternate exit it has used for the last few months too.

Shelves throughout the store were well stocked, including toilet roll, pasta and flour, which many shoppers stockpiled when the UK first went on lockdown. All was calm at the tills and self-service kiosks too.

I visited Aldi in Gateacre at midday on Tuesday and walked straight in as there was no queue outside.

Once inside, having helped myself to a squirt of hand gel at the entrance, there was the usual amount of customers you’d expect to see at this time of day and no one appeared to be in panic mode or overloading their trolly with multiple packs of toilet roll.

I checked out some of the products that were first to go back in March and found pasta, bread, baked beans and hand gel shelves were all about half full but nowhere near empty.

Toilet roll was in full supply and there was plenty of hand soap, nappies and formula.

The rest of the shelves were well stocked, with fresh fruit and veg, meat, frozen goods, store cupboard essentials and alcohol all as you’d expect to find them. Nothing like what we saw before the national lockdown back in March, thankfully.

I even spotted a 10kg bag of Whitworths plain flour for a bargain £2.49 so you know where to go if you fancy a spot of baking during the local lockdown.

I visited Asda’s superstore in Aintree at around 4pm today (Tuesday, September 22) and was pleased to find there was no queue and even the car park was fairly empty.

Where the trolleys are kept outside the stores there is cleaning products so customers can wipe them down. There is also another station inside the store too – so there are plenty of opportunities for customers to sanitise.

Despite it being close to the end of the day, everything was well stocked.

Find out about coronavirus case where you live by entering your postcode below:

Despite the Government advising a distance of one metre, Asda is still insisting customer keep two metres apart at all times, with floor markings still printed down its aisles.

Its one way system is no longer in stores, but all the customer I spotted were wearing face masks.

Shelves were filled with essential products such as hand sanitiser, pasta and toilet rolls so there was no indication of panic buying at Asda Aintree.

Sainsbury’s Rice Lane store has signs reminding customers of its safety measures which include the use of hand sanitiser, keeping a safe distance from each other and paying with card where possible.

I visited the store at around 2pm and was able to walk straight in without the need to queue – in fact there were no markings on the floor outside suggesting any queues were expected.

The store was really quiet when I visited so I found it easy to keep a safe distance from other customers.

Most products were well stocked apart from a selection of its meat shelves were bare and it was starting to run low on toilet rolls but there was no indication this was due to panic buying.

Morrisons was the only supermarket I visited which I saw staff back on its doors keeping track of how many customers were allowed inside at once.

It wasn’t clear what its limits were but as I visited when it was quite quiet I was able to walk straight in.

Inside, Morrisons is still operating its separate queuing systems whether you have a trolley or a basket with customers directed to different checkouts depending on which type of the shop they have.

Shelves were well stocked in store, with nothing running low – so if you’re thinking of heading to Morrisons I recommend going at around 4pm.