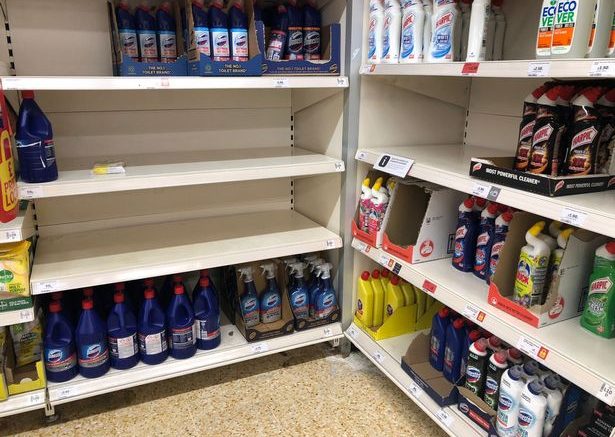 There are now just 10 weeks until Christmas Day and with reports of stock shortages due to a lack of HGV drivers we went to see if it is affecting local stores including Aldi and Asda.

The Road Haulage Association estimates there is shortage of more than 100,000 qualified lorry drivers across the UK and this is said to have affected the food and drink supply chain, plus other stores.

This week, toy retailer Smyths issued a statement to customers saying it is always a good idea to start shopping early “to avoid disappointment”.

READ MORE:Smyths Toys issues warning of ‘some toy’ shortages ahead of Christmas

With 10 weeks until the big day, people are beginning to wonder what the situation will be like as we get closer to December 25. This week, we visited supermarkets across Merseyside to see what stock levels are like now.

We visited the large Sainsbury’s store on East Prescot Road at around 4pm on Thursday. There were signs that it had been a busy day, with a few sections like the cereal and pasta aisles in need of a restock, but not completely empty.

There were some larger gaps, that could be down to stock issues. For example in the bottled water aisle, there were plenty of certain brands, while others were completely missing. Good job we’ve all got taps.

Over in the cleaning aisles there were some big gaps on the bleach shelves too. Other than that, the store was well stocked with no obvious stock issues.

The frozen aisles were full, there was no shortages in the wine and spirits section, or the toilet rolls, and the aisles already dedicated to Christmas treats and toys were nice and full. There was also plenty of stock in the clothing and homeware sections.

We visited the Tesco Express on Lord Street in Liverpool city centre this Thursday, at around 4.30pm. As a store known for getting busy around rush hour when people are heading home from work or waiting to catch the bus outside, I’d expected the shelves to be quite low in stock.

However, most products seemed to be fully stocked and organised, particularly when it came to cupboard food such as pasta, tins and cooking sauces.

The fresh food selection was somewhat lacking, but that’s to be expected around this time during the week. Freezer and alcohol products were well stocked too, and there were more than enough cleaning products and toilet roll available.

One major product that did seem to be missing from shelves was coffee. Nescafe, Kenco and L’or coffee items were completely missing from the shelf, with their empty places left bare. A sign told shoppers to ask a member of staff if you required one of these products, which is quite unusual.

Other than this, stock levels seemed normal at this Tesco store.

We took a trip to Aldi in Neston, Wirral, at around 1pm on a Friday and it was surprisingly busier than we anticipated. Despite the amount of shoppers, the aisles were well stocked, including the fresh fruit and veg section and the toiletry aisle. Notably, it had plenty of toilet roll for everyone!

However, as we approached the frozen aisle it became clear there was a shortage of a few frozen goods. Staff were unpacking boxes of products all around the shop, but there was no one restocking the freezers.

This particular Aldi also hasn’t had any lactose-free milk for a couple of weeks, and on our trip this was still the case hinting that there could be some supply issues with a few products.

We were delighted to see the Christmas aisle was full to the brim with sweet treats, so there’s no shortage of festive chocolates.

We visited Asda on Smithdown Road at around 3pm on Friday afternoon. Popular among students and referred to as ‘The Asda’, it’s well known for being a busier store.

There were plenty of people wandering the aisles doing their weekly shop – and they still had plenty to choose from.

We checked every aisle in store and couldn’t see any obvious shortages, except for a few empty shelves of cooking oil.

There were some gaps in the freezer section and some aisles definitely had a few missing items but it didn’t seem to stem from stock shortages, rather just a busy store that’d seen a lot of customers that day.

Essentials like bread, pasta and tinned food, as well as fresh fruit and vegetables were readily available, and there was plenty of toilet roll – so no panic buying in action thankfully.

If you’re after cooking oil, Asda on Smithdown Road won’t be the best spot to pick it up but every other shelf was relatively stuffed with products.

The Halloween section still had a decent selection of spooky treats, while Christmas chocolates and snacks were in abundance.

There may be some shortages in stores caused by supply chain issues, but from what we saw it’s certainly not causing any major issues at this stage in terms of affecting your weekly shop.

At all the stores we visited there was plenty to go around and the supermarkets are already full of items for the festive season, so people can begin stocking up now. Just don’t start bulk buying. No one needs 10 packets of stuffing anyway.

Wirral restaurant has been number one on TripAdvisor for a year