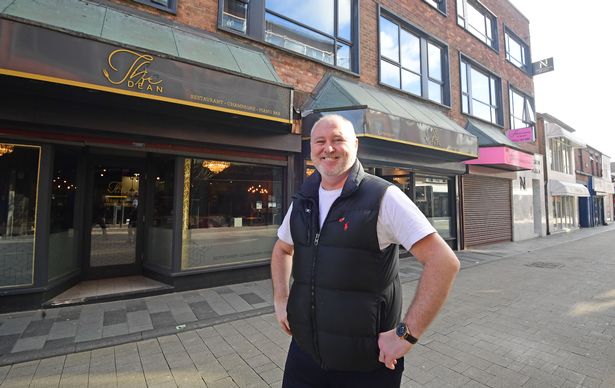 The owners of new St Helens restaurant which has already had to “turn hundreds away” since opening have announced their plans to expand.

In line with government guidance, Smokehouse by The Dean on Barrow Street in St Helens town centre opened for the first time last week, offering outdoor service only as ‘non essential’ shops were allowed to reopen.

Husband and wife duo Eddie and Vicky Dean saw the potential of Barrow Street when they opened their fine dining restaurant, The Dean, in March 2019 and have since opened their second business – a Texan barbecue-style restaurant – across the road.

Smokehouse by The Dean offers its customers burgers, ribs, sandwiches and milkshakes from an American themed menu.

The owners say they had to “turn away” 100 eager customers in just 24 hours after demand to book a table skyrocketed due to the reopening of outdoor hospitality.

Enter your postcode below to find local businesses to support

Determined to make up for lost time and support businesses they love and have missed, customers flocked to St Helens town centre last week as the new phase of lockdown easing began.

Owner and executive chef Eddie Dean said: “We opened last Monday with half the equipment breaking down which always happens with a new restaurant.

“We were full every afternoon up until the evening last week. On Saturday we had to turn away over a hundred people.

“We can sit 32 outside the restaurant and we have two hour slots to have as many people as possible. Our busiest time is between 4pm and 7pm. All in all over there were a hundred people who I had to turn away and say I’m sorry.”

Eddie said last week “was a blur,” but that the support has been “outstanding.”

He said: “It was a realisation within the first 24 hours of being open.

“The weather has been very kind to us at the minute. We still don’t have all the equipment but we could fit about 20 to 30 people indoors, so by taking up the other site we can have 60 people inside and 35 to 40 people outside when we can be at full capacity.

“It’s different genres coming. Kids coming when off with their parents, couples coming for a burger and a glass of wine.

“An older woman stopped by for a coffee and ended up staying for lunch and ordering a bottle of wine. The response has been outstanding.

“A few bodybuilders have been and said it’s the best burger they’ve ever had.”

Posting to Facebook, the husband and wife duo said: “Our current neighbours at Classy Cuts are moving into their other premises over the road (Forever Tanning and Beauty), to pave way for our expansion plans to create a bigger indoor dining space.

“Classy Cuts owner, Mandy, has been incredibly supportive of our ventures both at The Dean, and with this restaurant – and we are grateful for her working with us.

“We’d also like to thank Paul Nicholson, and the team at LUXOR who are working with us to merge the two units to create an EVEN BIGGER Texan Barbecue Restaurant in the Heart of St Helens.

“We’d also like to thank St Helens Council who’ve been instrumental in the expansion, with support regarding our plans, and guidance – especially pedestrianising Barrow Street on a weekend. Gary Maddock has also been invaluable.

“Due to the expansion, we will now be closed every Monday and Tuesday – until the renovations are complete.

“Remember, if your looking to dine in, you don’t have to book! We accept walk-ins, and we’d always look to accommodate you when we can!

“Thanks for your support, Eddie & Vicky! x”

The team behind the two restaurants have built up a strong customer-base and reputation across Merseyside in a short amount of time, attracting famous faces to restaurant and piano bar The Dean, including premier league footballers and X Factor stars.

Wolverhampton Wanderers centre-back Conor and his wife Aimee recently visited the Dean as it reopened under government guidance last week.

Boots’ baby and toddler event returns with discounts on Pampers, Aveeno and more

Mum raves about her ‘fantastic’ week at Southport Pontins