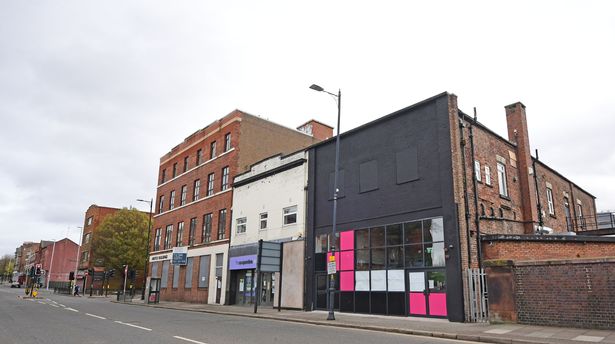 The man behind one of the newest and only dedicated music venues in Wirral says he hopes to break down the “psychological barriers” between Wirral and Liverpool.

Christopher Torpey, who runs Future Yard, a music events venue which opened on Argyle Street in Birkenhead on the week restrictions began to ease in April.

He says he is also hoping to “give people excuse to feel pride again” in a Wirral town that can sometimes feel “forgotten.”

Christopher told the ECHO: “We opened Future Yard in April this year, although we’d planned to open in 2020 and the pandemic happened.

“We painted ‘the future is Birkenhead’ as a tagline on the front of the building when we took it over and it is a bit tongue in cheek but it is also that I very much see Future Yard as at the heart of the transformation that’s happening in Birkenhead.

“Birkenhead has almost been a dirty word for a long time and people haven’t had any excuse to feel any sense of pride about the place.

“There are a lot of reasons for that, you could write essays and essays about the post industrial decline and all the different kinds of things that have fed into Birkenhead’s problems.

“That people dared to say the future is Birkenhead and dared to be proud of where they’re from, I think it’s unlocked things a bit in people’s minds, people starting to think a bit differently about the place they call home.

“People are starting to see possibilities where they maybe once just saw a dead end.

He added: “It doesn’t always have to be a bit of a forgotten town, you can think very broad, ambitious, brave, and hopefully people growing up around here and from the area and don’t have as much baggage can see the activity around what we’re doing and that upward momentum that seems to be bubbling up around here.”

Christopher says the response since finally opening after “kicking about” in the venue for 14 months as various restrictions came and went during the pandemic, they’ve had a “lot of pride from local people.”

The MyWirral newsletter will bring you news from across the borough in a way you’ve never had before.

How to sign up for a MyWirral Email Update

5) There are plenty of other newsletters to choose from too.

He said: “People have really responded to the idea of us championing Birkenhead and being ambitious with it.

“People have said Birkenhead has need something like this for some time and that’s ultimately one of the reasons we started Future Yard in the first place.”

The venue, which combines outdoor space, cafe, music venue and studios, as well as music industry training, is also attracting people from across the river.

Christopher said: “It’s been really really positive since we opened, especially the first couple of weeks with nice weather and people coming out and enjoying themselves again.

“It was also emotional, as people could see each other again, and we moved to open an outdoor garden and that has proved really popular.

“What’s been great is not only have we had a really positive response from people in the local area who are really happy to have something dedicated to music this side of the water rather than everything being centred only in Liverpool.

“We’ve also been seeing people dare to cross the Mersey and check out Birkenhead so whereas there was once a psychological barrier, people are now seeing that the other side of the Mersey is a place of possibilities and things happening.”

Ultimately, for Christopher, it’s about giving Wirral’s strong musical tradition a base and space for growth.

He said: “We want to give the music scene in Wirral a home. That’s why we’ve factored everything we did into the space.

“For those interested in live music, our live programme will cater that, and we will be doing four or five live shows a week and there’s also a bar and hangout space which is very much predicated on music with DJs and so on, so it’s geared toward people who really like that experience.

“We’re also going to be an artist hub, with studios in the basement for artists from the area looking to make their way and make music their career.

“Another aspect of what we’re doing is training for people in the local area to introduce skills with live music. We’ve just finished our first cohort with 16-24 year olds from Wirral, they’ve been learning the basic of putting on shows, live music and booking artists, culminating in putting on their own show and it’s been great to see.

“What we’re about is creating a buzzing hive of activity where people can meet, form bands, friendships, learn skills, for Future Yard to be many things to many different people.”

Based in a part of the Wirral with a strong Green presence, another of Christopher’s ambitions is to become a pioneering venue not just for the borough’s music scene, but in terms of its environmental credentials too.

He said: “We had the luxury of starting from scratch as a venue and when we did some digging we saw there was no carbon neutral music venue in the UK.

“There are some working towards it, larger venues, but we want to be the first grassroots music venue in the UK that is carbon neutral.

“Birkenhead and Tranmere are green wards and we want to embrace that momentum, and we realise that the people from this area have shown and voted that it’s what they really value and we really want to work with them on that.

“It’s like with everything we’re doing at Future Yard and what we’re trying to create, it’s about having those big ambitions and that attitude of what’s possible.

“We want others to see what’s possible for Birkenhead too. It’s an exciting time.”