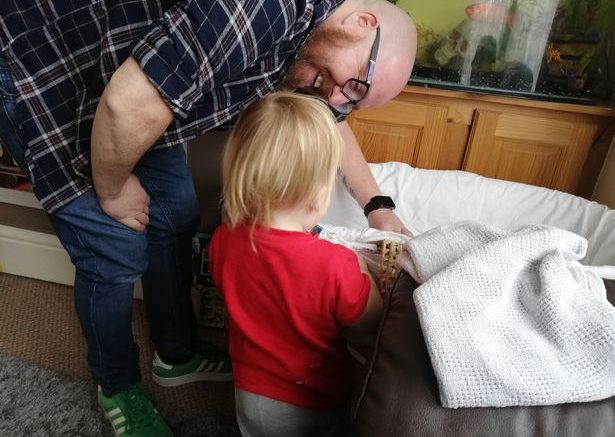 A new mum has shared her experience of giving birth at Liverpool Women’s under the new Tier 3 restrictions.

The mum-of-two was relieved to hear Liverpool Women’s had lifted visiting restrictions for partners on Wednesday, October 7, but just a week later the Tier 3 lockdown restrictions were announced.

Laura said her husband, Tony, was with her on the postnatal ward after giving birth by C-section to her daughter, when the matron came and told them that visiting restrictions were being put back in place.

She added that she had been worried all along that she would be left to care for her newborn on her own on the ward.

The 31-year-old told the ECHO: “I knew Tony would be accompanying me to theatre, it was what would happen after which worried us. My last baby was delivered by section after an undiagnosed breech.

“By the time I had the section, I was shattered and then left with a newborn to look after having been awake for two days and having had surgery.”

Laura, from Mossley Hill, said that on the day of her planned C-section she was confused over the visiting policy.

“We went in Friday morning as planned and even up until then the staff were saying something different to what the website was saying the policy was.

“I’d questioned it after my pre-op on Monday and being worried that there would still be confusion I emailed PALS from inside the hospital but didn’t receive a reply.

Enter your postcode below to find out more about coronavirus cases near you:

“It would have been really nice to have Tony there before the surgery, whilst getting ready for theatre to calm my nerves, but he was able to join me when we went down to theatre at 10 and the staff there were amazing as always.

“We spent about an hour in recovery and then we were moved to the ward where my partner did thankfully accompany me. They were quite relaxed on the ward regarding the visiting surprisingly and my partner went after about two hours but returned for his pre-booked visiting slot later on. “

But it was at this time, the couple were told by the matron that the policy had been changed again.

“Just before his time was up the matron attended the ward and informed us that unfortunately as of midnight there would be no more visiting due to the area being Tier 3, at which point I lost it about everything – the lack of communication right the way up to us going down to theatre was the last thing we should have been worrying about.

“The matron spent about an hour with us going through everything and answering questions I’d been trying to get answers from PALS about for weeks with no luck, and not only did she calm me down but actually cheered me up. My partner stayed for a little longer and I agreed not to discharge early.”

However, Laura said although the staff were helpful, it couldn’t replace the support she needed from her husband.

“The staff were all more than great, more than helpful, all amazing, but no matter how quickly they are physically able to respond to a buzzer, it doesn’t replace someone, your partner, being next to you to help you to look after the baby as soon as they start crying.

“Fortunately, I was mobile quite quickly and with the couple of hours I did have with my partner I was able to cope. But had he not been allowed to the ward at all, having to wait for someone to come and pass me my crying baby wouldn’t have been okay.

Laura, who also has a 21-month-old son, said she was now happy to be home with her family.

She added: “We’re both home thankfully. I had requested an early discharge even before the policy changes and the consultant agreed, but informed me a doctor would need to sign it off. We’re both good, although the stress wasn’t the start we both needed.

“Had I been due to have my section on the following day, I would have been cancelling it and looking at transferring to Arrow Park who were allowing partners to stay indefinitely following birth.”

Melissa Morris, 33, from Kirkdale, is already a mum to Jack and is due to give birth in two weeks to her second child with husband Keith.

She is also due to give birth at Liverpool Women’s and said if she goes over her due date, she has opted for another section instead of being induced.

She told the ECHO: “I heard about the restrictions being back in place and just find it so frustrating that you can have your partner in during labour but then they can’t visit once we have the baby.

“I know the hospital is just trying to be safe but after having my little boy a few years back, I would have been lost without my husband. I had a C-section last time so the first 12 hours after I had him I could hardly move so my husband did everything for me.

“I am just glad I’m not experiencing birth for the first time as I think it must be hard for first time parents and partners missing out on precious memories that they will never be able to get back and it might affect people mentally. It’s just unfair.”

Liverpool comedian whose Ed Sheeran song was watched by 25 million