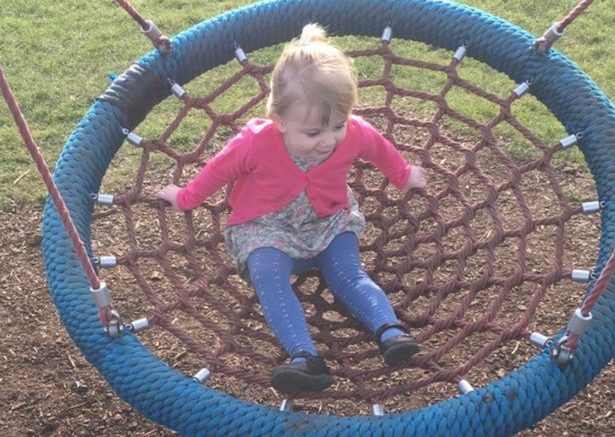 A Liverpool mum has described how she worries that she will never hear her daughter who has autism say ‘I love you’.

Kate Griffiths’ seven-year-old girl Lily-Rose has non-verbal autism and can only say a few words.

The one question Kate asks herself all the time is if Lily will ever say I love you back to her.

The 29-year-old knew that growing up Lily acted differently to other children and started her own research into what could be the cause.

Kate, from Kirkby, told the ECHO: “As a baby at nine months, I noticed Lily would inspect toys rather than play with them. I thought it was a bit strange and mentioned it to the health visitor who told me not to worry.

“So we thought nothing of her quirks and I knew no different because she was my first baby. But around two I noticed she wasn’t talking or playing like other children and she never spoke. She just didn’t interact like other kids and when we took her on holiday to Turkey, there were kids around her the same age but she didn’t want to get involved.

“She would eat dry spaghetti every day for breakfast, lunch and tea and she would fixate on things. Again I spoke to the health visitor and started doing loads of research into autism.”

Kate was training to be a nurse at the time and downloaded the assessment papers used to test for autism.

She said: “I did the tests with her and she failed on all her social and communication skills. I knew that rather than a mainstream nursery, she would be better in a special school but to do that I needed to get her an official diagnosis.”

After months of multiple meetings with local authorities and medical staff including psychologists and speech and language therapists, Lily was finally diagnosed at aged four with autism as well as global developmental delay.

This is a term to describe children delayed in one or more milestones of development including motor skills, speech, cognitive skills as well as social and emotional development.

Despite her condition, Lily has adapted well to living with her mum for half the week and with her dad Jon Adderley and her step mum Steph Brady for the other half.

Kate and her partner of three years Damian Nickson, Lily’s stepdad, who also has a daughter, Kate-Lynne, have also become part of what Kate calls her ‘blended family ‘.

The qualified nurse added: “They’re so lovely with her. They hadn’t met anyone with autism before Lily so it was a new thing for them both but they’ve adapted so well and know all her quirks.”

Kate, who now works for a private nursing company after working for the NHS for eight years, said: “People with autism don’t like change but Lily manages to have two homes and two routines. I wouldn’t wish for a better step mum to Lily than Steph. She really loves her and she cares for her so deeply – not just emotionally but she does a lot of Lily’s personal care.

If you are struggling there is help for parents caring for children with autism. Kate has had support from Knowsley Parents Carers Voice and MYA Choices Knowsley.

There are other autism charities and organisations in Liverpool and surrounding areas that can help you with support and connect you with other families.

Autism Together is a Wirral-based charity which provides services for individuals with autism and their families.

Liverpool Autism Adventures is a community business enterprise that offers families living with autism, leisure and play opportunities in an autism-friendly setting and exclusive use of activities during school holidays.

Merseyside Autistic Adults create opportunities for autistic adults on Merseyside to meet up, socialise and support each other.

The National Autistic Society can offer information, advice and support to people on the autism spectrum and their families.

“Lily is delayed in three or more areas, she struggles with speech, understanding of the world and new things. She’s still in nappies, and so Steff changes her nappies, bathes her and comforts her when I’m not there.

“Lily has come on so much, she uses her iPad to communicate as well picture cards. She understands most of what we are saying but can get confused. For example, if I ask her to pass me the remote, she might bring me a few other things before picking up the remote.

“When she was finally diagnosed I burst out crying. It was such a relief to know with the diagnosis she would get that extra support from a special school that she needed.”

Kate added that she does wonder if Lily will ever speak properly.

“It does upset me to think about if she will ever say I love you to me. I always say to her, ‘I love you – do you love mama?’ and hope she will one day say yes. But she tells me in other ways, we share lots of kisses and cuddles together.”

Now Kate and Steph have started their own Instagram account to share the challenges and the joys of caring for a child with autism as part of a blended family with other parents and raise awareness of some of the stigma attached to the condition.

Steph, who lives in Dovecot with Lily’s dad John, said that she was ‘scared’ when she learned the extent of Lily’s needs but added she wouldn’t change a thing.

She said: “John tends to work nights so a lot of the time it is me caring for her but the relationship I now have with Lily means Kate can relax when she is with us. I know Lily inside out and Kate knows that she’s safe with me. I treat her like she is my own daughter. I know in the past it’s been nerve-wracking for Kate but now she knows she doesn’t have to worry.

“It’s so important to co-parent together, with any child it’s important but with a child with complex needs it’s even more important to have that level of understanding.”

Steph and Kate have become so close that when they all met for a family dinner, both women turned up wearing the same dress, something they love to joke about.

The 35-year-old added: “We often have a giggle over social media and people comment on how rare it is to see this kind of relationship. We’re very lucky.”

Their refreshing attitude to parenting also means that together they want to raise more awareness about autism and the challenges they face.

Kate said: “We were going for lunch and someone was sitting in a seat that Lily wanted to sit in, it sent her into a meltdown and she was on the floor screaming and I remember everyone just moving from the nearby tables.

“She also has a stim where she flaps her hand when she’s upset or really happy which can also draw attention. We’ve taken her to Disneyland a few times and she has a mobility buggy because she’s not aware of danger and would run into traffic.

“A child pointed at her and said to her mum that girl’s in a pram and she’s making noises. Her mum was really embarrassed. But I would rather she explain to her children. People don’t have to be embarrassed, it’s ok to ask questions rather than staring.”

You can follow us for what’s on and things to do for parents, kids and families in Liverpool and beyond plus parenting news and more.

Steph added: “Autism is a hidden disability. When you’re out and about something so small can set Lily off. She might not like a certain thing but she can’t just say to me and John, ‘I don’t like it’ or ‘I’m feeling anxious’. Instead she might have a meltdown or end up hurting herself.

“Other people might look and think ‘look at that brat’ or think that she’s spoiled because it is so hidden and that’s why it’s so important to raise awareness. You don’t know what other people are going through or the extent of the child’s needs, so you shouldn’t judge.”

Foo Fighters tickets 2022 to go on sale for UK shows in Manchester, Birmingham and London