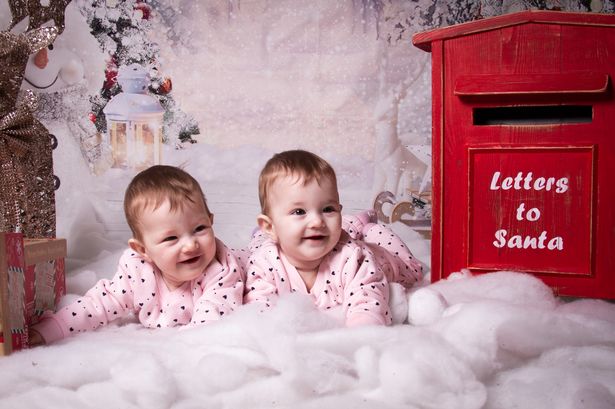 A Liverpool mum is celebrating her first Christmas with her little boy who is home after spending four ‘scary’ months in hospital.

But when Oscar was born he did not cry, he wasn’t moving and the doctors had to move fast to get him breathing.

Mum Kayleigh Nolan, from Bootle, thought he was dead.

The little boy, who was born weighing 10lb 1oz, only took his first breath at five minutes old and his second breath three minutes later.

Kayleigh told the ECHO: “It was so frightening. They let me see him and he looked dead. He wasn’t moving or crying. Then the doctors came in and started him on oxygen. It seemed like ages before he took his first breath.”

The 33-year-old fell pregnant in October last year and was five months along when lockdown hit in March this year.

She said: “It was scary having to do everything on my own. I couldn’t have anyone come to my appointments with me and for someone who suffers with anxiety like me, Covid just made it worse.”

Kayleigh, who has type 2 diabetes, had been attending an antenatal diabetes clinic by herself, when midwives who were monitoring her baby’s fetal heart rate and movements, told her she needed to go straight to the hospital.

The mum-of-two said: “They told me to go straight to the Women’s and not to go home for anything first. It was very scary. When I got to the Women’s, I was again hooked up to the monitors to keep a check on Oscar’s heart and movements. His heart trace was poor just a baseline no accelerations or decelerations were detected.

We have tried to feature as many babies as we could and want to thank you so much for sharing your stories with us. Check out more miracle babies below.

“After a while, I was told to call Oscar’s dad, to get to the hospital as Oscar needed to come out within the hour. Luckily, Jamie made it and I was taken to theatre to have my section and Oscar was born at 11.22pm.”

After taking his first breaths, Oscar was taken to the neonatal unit where he was placed on a ventilator for six hours.

The mum-of-two added: “He was then on high flow oxygen for a few days before going on low flow oxygen. He had to have an NG tube placed to start on milk at four days old but before that, he was on fluids via canula.

“But again because of Covid, as soon as I had the baby and was taken to ward, Jamie had to go home and was all alone.”

The new mum and baby were kept at the Women’s for 12 days and were eventually discharged on July 12 but when they got home, Kayleigh knew something was wrong.

She said: “You just know as a mother when something isn’t right. While at home, Oscar wouldn’t take a bottle and when he did, he would get a blue tinge around the mouth. A couple of days later, he went really blue and floppy when I was trying to feed him so I rushed him to Alder Hey A&E.”

Medics hooked Oscar up to an oxygen saturation monitor which showed that he was not getting enough oxygen.

“He was desatting [meaning his oxygen saturation kept dropping] continuously and the doctors and nurses were rushing in and putting him on oxygen to bring him back to normal sats. This was so overwhelming and very scary. I was moved to a parent room because they needed to attempt a lumbar puncture. But while I was in the room, I could hear my son screaming, my heart broke and anxiety kicked in.

“Eventually, the doctors came to get me and took me back to see Oscar it was about 3.30am at this point. As I walked in Oscar started desatting again.”

Once more the medical team rushed in to help Oscar and Kayleigh was told he would need to go to the High Dependency Unit (HDU) but the worried mum was not allowed to stay with him.

She said: “My heart just broke again. He was taken to HDU and I made my way home, car seat in hand and no Oscar. It was a very emotional taxi ride home.”

As Oscar’s problems persisted, the staff at Alder Hey Children’s Hospital made the decision to keep him in until they could find out what was causing his oxygens sats to keep dropping.

But after spending nearly four months in hospital, he was allowed home on November 3, despite doctors not being able to make a diagnosis. He will now spend his first Christmas at home with Kayleigh and her 13-year-old son JJ.

Kayleigh said: “Oscar had every team and every test you could think of while in Alder Hey and there’s still no diagnosis.

“They found he has obstructive and central apnoea but can’t find an obstruction or a reason why he has so many central apnoeas. He will have another sleep study in the new year.

“For now he has a ventilator of a night when he sleeps and a sats machine to keep a check on his sats. He also has a peg and feed pump as he can’t take a bottle as it makes him desat still with no reason why.

“It’s been a very long, stressful and scary 25 weeks but we are home and excited for his first Christmas. Oscar is my little lockdown miracle baby and we are hopeful that as he grows stronger and bigger his problems will subside or a reason why they are happening will show.”