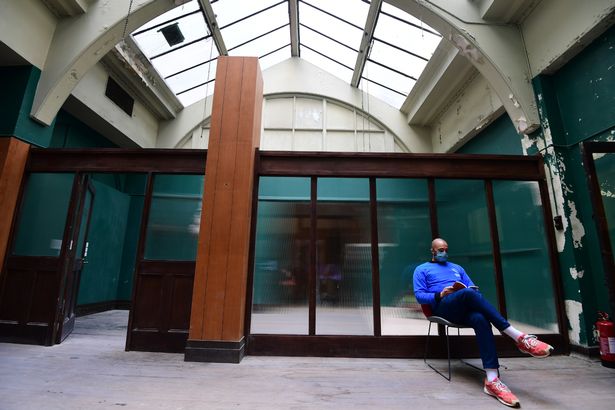 From the outside Liverpool’s Cotton Exchange is a bland late-1960s concrete building – but step inside a side door and walk down a flight of steps into its neglected cellar and you would be surprised by its opulence.

A corridor lined with lush green tiles leads into a series of rooms with grand arched windows, decorative plaster moulding and wooden panelling.

Its state of decay adds to the mysterious atmosphere – holes in the wall where electric sockets have been ripped out and peeling paint give the cellar a forgotten air.

The space is currently open to the public as part of the Liverpool Biennial contemporary art festival, which has taken over galleries and buildings across the city centre.

Part of the excitement of the Biennial is discovering places that you’ve never been to before, even if you’ve lived in Liverpool all your life. As well as this building, Lewis’s former department store is also open to explore.

While the Cotton Exchange, on Old Hall Street, was once one of the city’s grandest buildings, its history is dark.

It was built by 2,000 men and opened in November 1906, as the new home of Liverpool’s cotton traders. To celebrate, Old Hall Street was bedecked with banners and streamers, and there was a fancy banquet for the city’s great and good.

But the festivities ignored that the cotton trade was built on the backs of the millions of men, women and children kidnapped from Africa and sold into slavery.

And while slavery had been officially abolished four decades earlier, Africans and African-Americans continued to work on the plantations owned by their former enslavers.

The work the Biennial has chosen to display in the Cotton Exchange focuses on slavery and the racism that continues to pervade America and the UK today – and forces us to confront our own preconceptions and subconscious prejudices.

But while Xaviera Simmons’ photographic pieces and Sonia Gomes’ sculptures are vibrant and powerful, around them the walls of the building constructed from wealth generated through slavery are peeling.

When it was first built, the Cotton Exchange had a huge neoclassical façade with a columned portico and two baroque corner towers.

Inside, in a vast hall surrounded by an elaborate colonnade and topped with a glass roof, the traders met to trade cotton for the latest prices brought by telephone and cable from New York and Bombay.

But in 1967, an ‘act of unthinkable vandalism‘ took place as the façade was pulled down and replaced with what you see today. At the same time, the trading hall was removed.

Two weatherworn sculptures – symbolising The River Mersey, Commerce and Navigation – that once looked down from the towers now stand at street level.

The building is now office space for a range of businesses, including law firm Morecrofts, and many of the original features remain.

Warning to shoppers over items they ‘should not buy’ for Christmas

23 of the best rated free family attractions in Liverpool