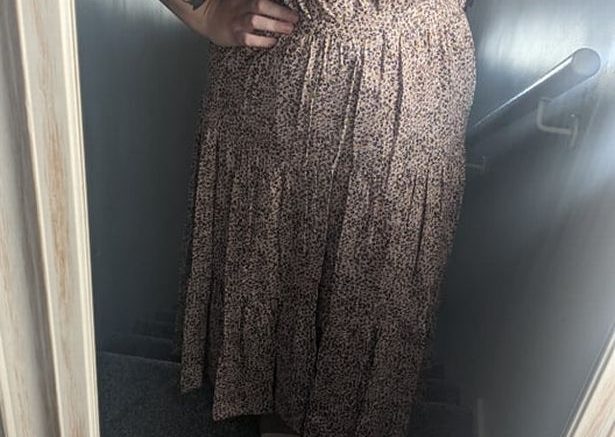 Matalan shoppers recently went crazy for a ‘gorgeous’ co-ord they spotted online – so I tried it to see what all the fuss was about.

Now that the warmer weather has arrived, shoppers have been scoping out social media for the best clothing and accessories.

Recently, Matalan shoppers spotted a Pink Animal Print Co Ord top and skirt on Instagram and quickly shared their love in the comments below.

READ MORE:My new favourite dress was £20 from Boohoo and I’m still not over it

The dress was praised as “gorgeous” and a “bargain” by shoppers – so I decided to order the outfit myself and see if it lived up to the hype.

To say I was disappointed is an understatement.

The outfit is made from a soft viscose fabric and includes a midi skirt and bardot-style top.

The top features floaty short sleeves and thick straps, while the skirt has an elasticated waist and a tiered hem. The animal print is created using pinks, yellows and browns.

The outfit is priced separately on Matalan’s website ; the top costs £10 and the skirt is £14.

The material of the top and skirt were much thinner than I’d expected and felt cheaper than its bargain price led me to believe.

The fitting of the whole co-ord was tighter than I’d anticipated and I probably should have sized up to be more comfortable. The material was pleasant to touch and didn’t itch but definitely did some unwanted clinging.

The thick straps on the floaty, bardot top proved pointless as they were not adjustable and ended up falling from my shoulders over and over again. I see now why the model on Instagram had them tucked into her top.

While I’m sure the skirt could have been described as ‘midi’ for all those taller people out there, I’m only 5ft4 and the dress touched my ankles. This didn’t particularly bother me since it is quite floaty, but if you’re only short and wanting a midi skirt, this might not be the one for you.

I preferred tucking in the co-ord top in order to give the outfit some shape too, since it didn’t offer much due to its floaty nature.

Matalan’s new summer outfit just didn’t tick the right boxes for me this time around, bargain or not.

The Pink Animal Print Co Ord top is priced at £10 and can be bought here .

You can find your nearest Matalan store here.

Liverpool named among the best cities for vegan takeaways