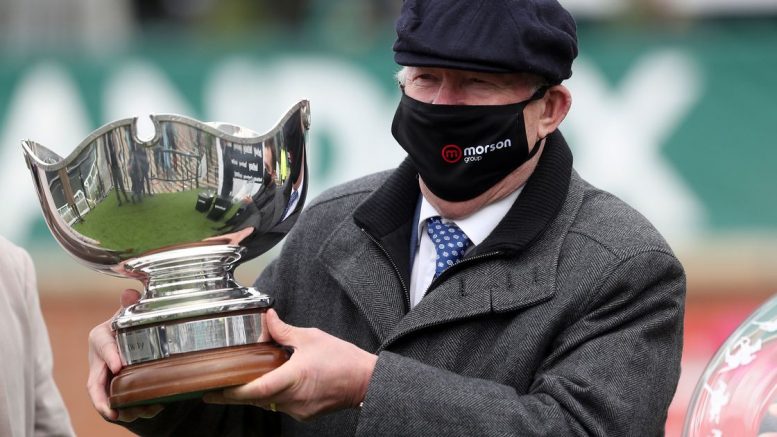 Sir Alex Ferguson loves a treble, and on day one the 2021 Grand National Festival he added another of a very different kind.

Not since 2007, when his Manchester United side defeated Everton twice at Goodison Park and then Liverpool at Anfield, has Fergie enjoyed a treble on Merseyside but he did just that at Aintree 14 years on as he celebrated winners in each of the first three races, all Grade One affairs, with three horses he part owns.

It all started in the Manifesto Novices’ Chase as the Dan Skelton-trained Protektorat pipped the more fancied duo of The Shunter and Hitman.

Then, Monmiral extended his unbeaten record to five, solidifying the view that he is one of the most exciting juvenile hurdlers around before Clan Des Obeaux spoiled the Tiger Roll party by winning the Betway Bowl.

And the legendary football manager was blown away by a dream Grand National Festival day in a sport in which he has a long affiliation.

“That’s the best day I’ve had in my time in racing, which is about 20 years or so,” Ferguson said.

“It is different to when I was managing my football teams – I was in control of what was going to happen on the pitch, but I’m not in control of that (on the racetrack) as the trainer does all of that and as an owner you hope it goes well.

“You do get the same excitement when you win big races like that as it does get you very excited.”

Having been so badly trumped by Ireland at Cheltenham, the home British team fired back with a vengeance on day one by winning five of the seven races.

Monmiral’s victory continued his impressive form but it was perhaps the performance of Clan Des Obeaux that will most please the Somerset man.

Having come second and third in the last two runnings of this race the nine-year-old, who was held back from Cheltenham last month, made it third time lucky in the day one headliner.

The 5/2 favourite made short work of his rivals, beating Clondaw Castle into second by a mammoth 26 lengths, with dual Grand National winner Tiger Roll a long way back in fourth on his return to Aintree.

For a horse with two King George wins in his locker, this was another supreme display and vindication of Nicholls’ decision not to go to Prestbury Park with him.

He said: “Fergie’s three-nil up in Liverpool eh! How about that?

“That was one of his better performances. The cheekpieces just sharpened him a little bit and let him stride on, I think we’ve learned our lesson of the last few years in that we need to make more use of them.

“Two fantastic rides he’s had [Harry Cobden] but it was really good to get Clan someway back to his best.

“He won races when he was three, he went chasing as a four/five-year-old, as long as we don’t over race him he’ll be back.

“King George will be his first aim and back here his second [next year]. One prep run at Newbury and then come back here again.

“They’ve [owners] had a great day. It’s good to get owners back. I can’t wait to get crowds back, you imagine the reception he would have had then.”

It took until the fourth race for the Irish to get on the board as Abacadabras bounced back from falling at Cheltenham with victory in the Grade One Aintree Hurdle.

And it saw jockey Jack Kennedy’s red-hot form continue, having won the Gold Cup with Minella Indo a mere three weeks ago.

“Massively, the loose horse really helped me,” Kennedy said. “It helped keep him interested so that worked out great.

“I rode him patiently there going over two and a half miles and it suited. I’m delighted for the whole team back at home in Cullentra.

“He jumps like a real hurdler, I suppose he would jump a fence as well but that’s for the O’Leary’s [owners] to decide.”

And the Emerald Isle had a second winner in the final race of the day as Blackmore maintained her stellar year with victory on Me Too Please in the Mares’ Standard Open National Hunt Flat Race.

The star jockey, fresh from becoming the first woman ever to win the top jockeys crown at Cheltenham, added yet more silverware to her collection as the five-year-old mare made it a second win from three races.

Elsewhere, there was a shock in the Foxhunters’ Open Hunters’ Chase as local trainer Joe O’Shea emerged victorious with 66/1 Cousin Pascal over the Grand National fences.

With amateur riders welcomed back to competition, James King saddled a second winner in the 2m209y race.

Next shoppers tempted by new sandals they say look ‘so comfy’