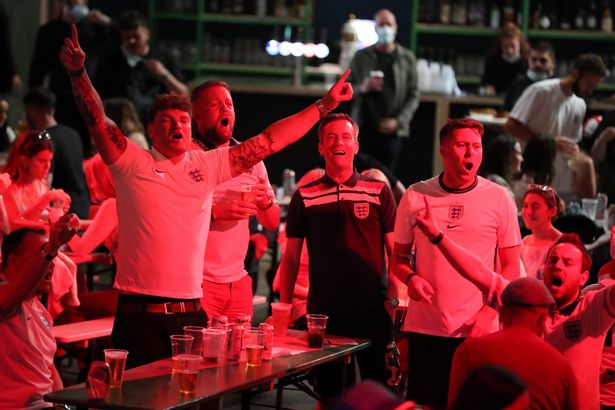 Gareth Southgate’s side made history after beating Germany earlier this week, with goals from Raheem Sterling and Harry Kane securing a 2-0 win for England at Wembley.

The game proved to be a historic affair, full of drama between one of football’s most evocative rivalries but England proved victorious.

As fans rushed to watch England go head to head with Ukraine this evening, packing out bars and beer gardens throughout the city centre.

Supporters are out in force this evening despite the rain at bars including Camp & Furnace, McCooleys and more, with hopes high of making it to those all important semi finals.

Fans also headed to outdoor venues across the city centre to watch the match.

As the ball hit the back of the net, the spectators at Camp & Furnace jumped up in unison and burst into song as Harry Kane’s goal put England 1-0 up within four minutes of kick off.

The winner from tonight’s match will face Denmark in the semi-finals on Wednesday night, with Italy and Spain in the other side of the draw after their respective wins over Belgium and Switzerland.

Prior to kick-off, fans were in high spirits for the quarter-final clash at the sold-out event in the Baltic Triangle.