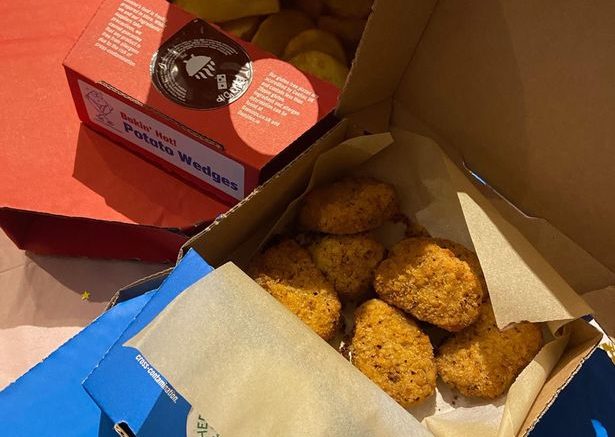 Nothing beats a takeaway, especially during lockdown, but they can often be a pricey affair.

As the hospitality industry remains mostly closed while the coronavirus pandemic continues, many of us have been turning to the trusty takeaway.

Prime Minister Boris Johnson last month confirmed the government’s roadmap out of lockdown, which aims to see the country restored to normality with all restrictions lifted by June 21 – if the government’s four key tests are met.

Bars and restaurants are allowed to reopen from April 12 for outdoor service only but that doesn’t mean we’ll be turning our backs on takeaways anytime soon.

With that in mind, we decided to pit popular takeaway Domino’s against budget-friendly supermarket Aldi.

Aldi’s ‘fakeaway’ Carlos range aims to hit that takeaway craving for a fraction of the cost, but does it compare to the experts at Domino’s?

The pizzas, though expensive, were delicious. Domino’s nailed the perfect balance of pizza sauce to cheese ratio and didn’t scrimp on the flavour. The sauce was zingy and rich while the cheese was delightfully gooey.

The dough tasted fresh and indulgent. The crust was soft enough to enjoy without the need for a dip, though the included garlic dip did give it a little edge.

The potato wedges were lightly spiced and perfectly cooked – fluffy but still with a bit of a bite, though the price is a bit steep for what you get.

The vegan nuggets were unfortunately very dry while the breadcrumb casing was flavourless, leading to an unsatisfying and bland experience.

Aldi’s Carlos range has a few items to choose from, though no nuggets or wedges to compare to Domino’s.

The popular discount retailer’s full Carlos takeaway range, which includes two pizzas, a side and dessert cost just £6.25, which is more than £34 cheaper than the equivalent from takeaway giant Domino’s.

We opted for two Carlos stuffed crust cheese and tomato pizzas (£1.59 each) and garlic pizza bread (89p), taking our total bill to £4.07. If we’d paid full price for our Domino’s, Aldi’s version would have been a whopping £40.39 cheaper.

But how did the taste measure up?

The pizza dough was a lot tougher and drier than Domino’s and you could tell it had come from the freezer aisle, though it was still enjoyable.

The cheese in the stuffed crust was really disappointing though, it didn’t taste of anything and was a bizarre texture, almost like a cheese sauce than real cheese.

The flavour of the sauce was a good rival to Domino’s as it was tangy and generously applied to the pizza base. The cheese, though, didn’t bake as well and wasn’t as satisfying as Domino’s.

The garlic bread was unfortunately incredibly greasy and a little sickly to eat.

For us, Domino’s pizzas are far superior when it comes to taste – but they are overpriced when there are no offers available.

Our Domino’s pizzas tasted freshly made whereas Aldi’s were much drier and tougher, and you could tell they had been frozen.

Aldi comes out on top by a mile though when it comes to price.

If you’re keen for a weekend takeaway to indulge in but you don’t want to break the bank, then definitely opt for Aldi’s budget-friendly offerings.

The ‘fakeaway’ will definitely satisfy those pizza cravings and still hit the spot while saving you plenty of cash to splash out on other treats.

If you’re happy to splurge a little and taste is the most important thing to you, then Domino’s is the winner.

Next’s ‘comfy’ rocking chairs that shoppers say are ‘so pretty’

We tried four different foundations & there was a surprise loser