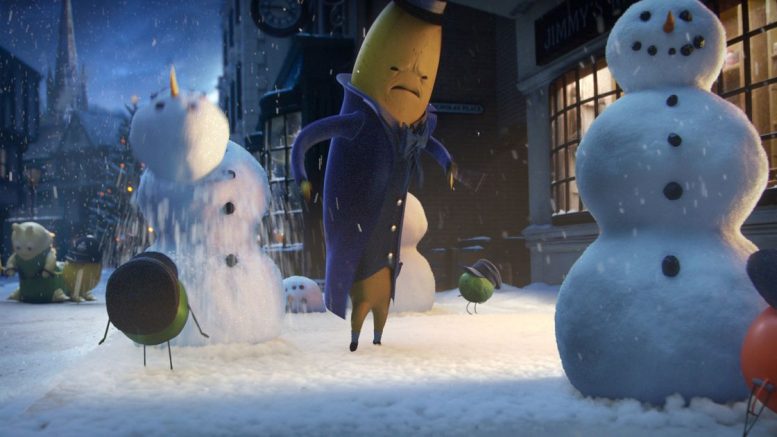 Aldi shoppers have spotted a “savage” moment in Aldi’s new Christmas advert, which was released today.

The retailer has revealed its full length advert featuring Kevin the Carrot, Ebanana Scrooge and England footballer Marcus Rashford in the role of Marcus Radishford.

The advert, which premieres on TV tonight (November 11) at 7.15pm, is a Dickensian-style take on A Christmas Carol, and follows the story of Christmas loathing Ebanana Scrooge, who is reminded of the joys of the festive season by Kevin the Carrot.

The animated story introduces viewers to a medley of fruit and vegetable characters – including Marcus Radishford, Tiny Tom, Peas and Goodwill and Kevin’s Dickensian family.

Now, Aldi shoppers have spotted an incident in the background of the scenes – and they think it’s “genius”.

In an early scene of the advert viewers have spotted Cuthbert the Caterpillar – of Cuthbert v Colin – being arrested by two lemon police officers.

The moment makes fun of the ‘Battle of the Caterpillars’, which started earlier this year when Marks and Spencer started legal action against Aldi, arguing that the supermarket’s Cuthbert the Caterpillar cake infringes M&S Colin the Caterpillar’s trademark.

The issue was dubbed the ‘Battle of the Caterpillars’ by fans, who were quick to take sides, create memes and make jokes around the issue.

Aldi’s marketing team couldn’t resist getting in on the joke back then, and now it looks like they’ve joined the fray once again.

Shoppers who spotted the joke took to Twitter to share it with friends, with many people praising the advert and saying Aldi had “won the Christmas ad game”.

One person wrote: “I absolutely love A Christmas Carol and this is such a great advert. Complete with Cuthbert the Caterpillar being arrested at the start”.

Another said: “Check out Cuthbert getting arrested in the background! I aspire to be as savage a marketer as Aldi.”

A third added: “Cuthbert the Caterpillar being arrested by sour lemons in the background… @AldiUK have just won the Christmas ad game.”

Another wrote: “Cuthbert the Caterpillar gets arrested! Genius trolling from Aldi”.

Aldi’s full 2021 Christmas advert, ‘A Christmas Carrot’, will premiere tonight (November 11) on ITV during the centre break of Emmerdale at 7.15pm.

Scheme like Eat Out to Help Out could return after lockdown